FIRST MONTH £10 PLUS NO JOINING FEE 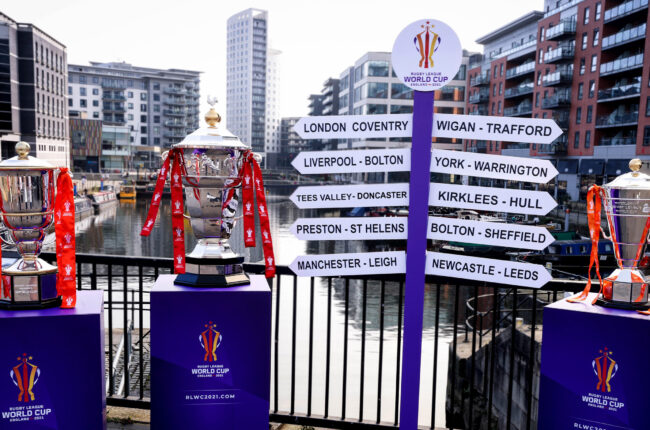 Tuesday 29 March marks 200 days to go until the Rugby League World Cup 2021 (RLWC2021) makes a real impact across the nation when England take on Samoa in the tournaments’ opening fixture at St James’ Park, Newcastle on 15 October 2022.

To commemorate the milestone, the tournament is undertaking a 48-hour trophies tour of the 18 host towns and cities in celebration of a 48-hour ticket upgrade offer, whereby fans can benefit from a ticket upgrade that is too good to miss. Fans can buy a Category C ticket for a number of opening matches and get upgraded to a Category B, meaning fans can secure one of the best seats in the house, with prices starting from just £15.

The trophies tour, whereby the silverware from the men’s, women’s and wheelchair tournaments will be paraded around the towns and cities getting ready to host the 61 matches of the upcoming World Cup, commences at 07:00 in Newcastle with RLWC2021 Ambassador Jason Robinson, joining famous names from Newcastle’s array of clubs. Together, they will attempt an audacious challenge of kicking the Sully Ball, the RLWC2021 Official Match Ball, through a giant RLWC2021 logo which will be floating on the River Tyne.

The tour will then pass through six of the other host locations, including Leeds’ Headingley Stadium, before making its final stop of the first 24 hours in Kirklees at Huddersfield’s John Smith’s Stadium.

Day two on Wednesday 30 March will begin at Manchester’s Old Trafford, the home of the double header finals of the men’s and women’s tournaments. The journey will then continue to visit the remaining host locations, before its final stop being the Emirates Stadium in London.

The promotional tour will also feature the Tournament’s new campaign ‘This is Real Impact’, to support ticket promotion and provide a platform to tell the many stories of the contribution the Tournament is making in communities through its social impact programme and in respect to inclusivity in hosting the men’s, women’s and wheelchair tournaments under one World Cup for the first time in the sport’s history.

RLWC2021 will also team up with Official Social Care Partner, Community Integrated Care, who have organised several volunteer Power Squad members to help assist with media duties, photography, and refreshments at each certain location, as well as taking part in celebratory fun.

Jon Dutton, Chief Executive of RLWC2021, said: “After a challenging couple of years for everyone, it is hugely exciting to be able to take our three unique trophies to each host partner as they put on their own celebration and make a ‘Real Impact’ in their local community.

“The road to RLWC2021 starts now and with this limited ticket offer and exciting new campaign being released, we hope to encourage fans far and wide be involved in the biggest, best and most inclusive Rugby League World ever to be staged.”

Cllr Tony Higgins, Warrington Borough Council’s cabinet member for Neighbourhood and Communities, said: “Excitement is once more starting to build in Warrington for this prestigious sporting event, and its great news that the coveted trophy will soon be making its way towards our town.

“This is an important milestone as we begin our countdown to the tournament and in the weeks, and months ahead we will be working together to put all the pieces in place for an exciting, inclusive event which engages with everyone in the community.”

Ticket prices for the tournament start as low as £2.21 for concessions, as the unique tournament will be one of the most accessible and affordable for fans with more than 80% of tickets priced below £50. Fans can purchase tickets via www.rlwc2021.com/tickets.

Blog Categories
Recent Posts
Start your fitness journey with LiveWire.
Questions? Get in touch, we're here to help .
Get In Touch
© Copyright LiveWire 2022 - All Rights Reserved
Website by Bigwave Marketing
Back To Top

This website uses cookies to improve your experience while you navigate through the website. Out of these, the cookies that are categorized as necessary are stored on your browser as they are essential for the working of basic functionalities of the website. We also use third-party cookies that help us analyze and understand how you use this website. These cookies will be stored in your browser only with your consent. You also have the option to opt-out of these cookies. But opting out of some of these cookies may affect your browsing experience.
Necessary Always Enabled
Necessary cookies are absolutely essential for the website to function properly. These cookies ensure basic functionalities and security features of the website, anonymously.
Functional
Functional cookies help to perform certain functionalities like sharing the content of the website on social media platforms, collect feedbacks, and other third-party features.
Performance
Performance cookies are used to understand and analyze the key performance indexes of the website which helps in delivering a better user experience for the visitors.
Analytics
Analytical cookies are used to understand how visitors interact with the website. These cookies help provide information on metrics the number of visitors, bounce rate, traffic source, etc.
Advertisement
Advertisement cookies are used to provide visitors with relevant ads and marketing campaigns. These cookies track visitors across websites and collect information to provide customized ads.
Others
Other uncategorized cookies are those that are being analyzed and have not been classified into a category as yet.
SAVE & ACCEPT